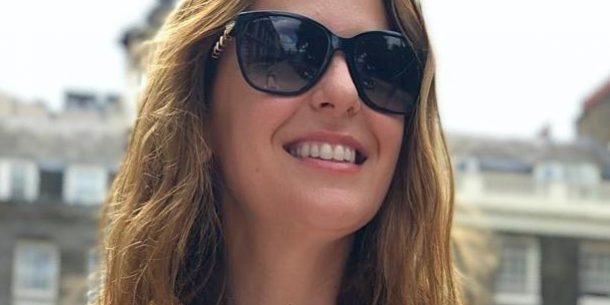 I recently visited Cape Town after being away for six years and took my three French children on a tour of the school where I spent my teen years.

Vivid memories suddenly popped up as I walked through the corridors, classrooms, halls, and playgrounds, taking me back in time to one of the places that shaped who I am today, Herzlia.

I was born in Israel to Argentinian parents who raised me in South Africa (my father came to work as a doctor for the then Republic of Ciskei in 1984 – during Apartheid). Our first home upon moving to Africa was the eastern coastal city of East London. It was there that I started my schooling at age six in an all-girls’ school called Clarendon School for Girls. I have to give credit to this school for teaching me the art of being a lady, how to knit and sew, how to perfectly harmonise every school song we sang, how to play tennis like a champion, and how to recite Pieter Dirk Uys poems by heart (we are talking 1980s). I loved everything about this school.

In 1990, at age 13 (halfway through grade 7) and shortly after my father’s sudden death, my family moved to Cape Town where my mother enrolled my younger sister, Yaara and me at Herzlia Constantia where she took a post as a teacher.

Little did I know what was to come ahead of me. Instead of the olive-green uniformed, pristine ladies of Clarendon that I was so used to, I found myself walking into a hall bustling with very lively, loud children. The girls dressed in blue button-up tunics with a white embroidered letter “Hay” on the top left side pocket, and the boys in khaki button-up shirts, matching khaki shorts and socks pulled up to the knees. It was the school assembly and everyone sang in upbeat unison the morning prayers to kickstart the day. I was clueless but determined to fit in and started taking it all in as fast as I could.

Middle school was a jungle – but in a good way. I recall mostly the space and the spirit we had to express ourselves. It was there that I discovered fine and graphic art and couldn’t wait for art classes. I would charge through the school so eager to paint and learn about the great European, American and African artists. That class would come to life for me as we learned about colours, light, techniques, and masterpieces. I felt enchanted by this creative world.

Two years later I started high school. I remember taking a deep breath on the first day and thinking to myself, no matter what happens, I have to make it. I was motivated to gain as much experience to take into the ‘big world’ with me. I volunteered for everything the school offered, from “The Big Clean” committee pledging to physically pick up rubbish along Table Mountain, to singing in the school choir, writing for the school magazine, and even modeling the latest 1994 fashion trends along the runway in the “Standard 9 Fashion Show”.

I continued studying art towards my Matric, and I distinctly remember our teacher, Mr Simons, telling us to dream big and if we’re lucky enough, one day we may see the Mona Lisa at the Louvre in Paris (a challenge I took very seriously). I was elected to represent Herzlia on the Junior City Council in grade 10 and by grade 11 I was elected as the Deputy Junior Mayor of Cape Town. My photo made it to The Argus newspaper and in true to my ‘future-me’ style, the photo depicted me sitting cross-legged on top of a desk with my robe and medallion (looking a little too glam yet very excited for my new role). I organised numerous charity events for children in the Western Cape including giving boys from a homeless shelter a challenge to pull a Boeing 737 for 100 meters to raise funds for their home (this event made it to the front cover of newspapers). I was also asked to judge at the Argus Nicknacks Miss Rave and Raver of the Year beauty pageant in 1994. And possibly the most memorable was being invited to meet and have tea with Her Majesty Queen Elizabeth II and HRH Prince Phillip, Duke of Edinburgh, during their visit to Cape Town in 1995.

It was at this time that I entered my matric year and was elected to serve on the Student Council. I happily graduated with a Matric Exemption, and I was most proud of having accomplished almost all of my goals when I completed my experience at Herzlia. I walked out with “The Rene and Ernest Samson Award for Service to the Community”, an “Effort and Diligence” certificate, I was captain of the girl’s tennis team, and awarded the “Half Colours” tie for Leadership (half?) amongst many other accomplishments.

After leaving Herzlia, I promptly discovered that I was passionate about ‘being out-there’ and people. I went on to study Public Relations and Communication Science at the Cape Technikon University in Cape Town for 4 years (today known as the Cape Peninsula University of Technology). While there, I volunteered as a radio DJ for the local campus radio station and I co-launched an initiative to promote local South African musicians by inviting them to perform live at the campus amphitheater during lunch hours. Throughout my studies at university, I was granted some extra weeks off to work as a camp counselor/instructor at American Summer camps for children aged 9-17 just outside Philadelphia, an experience that enriched me beyond words, discovering a new culture and that amazing American energy. Clearly sitting in a lecture theatre every day wasn’t enough for me, I needed to explore and experience the world for myself while also studying.

As soon as I graduated from university, I went to London on a 2-year visa and I landed myself the best job in the world. It was the year 2000, and I found myself working as an intern for MTV Networks on the International Communications team. Here I was, a girl from Herzlia answering calls from ‘Madonna’s people’, organising press conferences with Alicia Keyes and P. Diddy, watching Beyoncé rehearse in her tracksuit, the list goes on and on. I stayed at MTV for 6 years, 2 of which I helped back in Cape Town with one of their most incredible projects “46664”, a series of AIDS benefit concerts played in honour of Nelson Mandela which started in 2003. Followed by my 2 years in their Tel Aviv office where I not only became the regional Brand Manager but was also asked to be a TV presenter for one of MTV’s new channels called “Game One”.

The first episodes of this new channel were shot in Paris, and it was there that I met my future French husband. Less than a year after meeting, I moved to Paris and started a new life with him. Finding a job without speaking French was impossible at the time, so in 2008 I launched my own online blogazine in English called “Paris Popcorn” where I wrote (and still write) about the fabulous luxurious French culture and fashion and lifestyle in general. Before I knew it, my articles were translated and published in magazines all over the world. I was covering the Paris Fashion Week runway shows and backstage, I attended art gallery openings on locations such as the Champs Elysees and Place Vendome. I was invited to attend exclusive champagne events at the Cannes Film Festival, I interviewed fashion legends the likes of Karl Lagerfeld, Marc Jacobs, Katy Perry, Tilda Swinton, Kanye West, Eva Herzigova, Pierre Cardin and Sonia Rykiel

I also used my multilingual ability to my advantage and landed jobs presenting live international events in arenas on stage in front of thousands of people in English, Spanish, and Hebrew (and later French, as I became fluent pretty quickly thanks to my already spoken Spanish). I even found myself presenting a live show in Las Vegas, and recording voice-overs for TV commercials, radio jingles, and in-store supermarkets the world over.

All this crazy energy and desire to do it all and see it all was constantly burning inside me. Did it have anything to do with the ‘space and energy’ we received at Herzlia back in the day? Perhaps. Did my mother Miriam’s desire for her children to be fearless play a part? For sure!

And maybe it also had something to do with the words of Theodore Herzl that were etched on the school archway that greeted us every morning ‘Im tirzu ein zo agada’ – ‘If you will it, it is no dream’.

So? Did I ever get to see the Mona Lisa in person? Yes, I did! At a private event at the Louvre with a glass of champagne in one hand, I gave a little “cheers” and a wink to Mona thinking of my dear High School art teacher Mr. Simons as I took a sip of the French bubbly.

Today, we are settled in London, I’m a mom to 3 beautiful children (Sienna, Owen, and Carla) who are completely fluent in French and English and nearly Spanish too (but unfortunately not Afrikaans), and are my biggest pride.

Covid clearly put a halt on many things, but now that things are getting back to normal and my kids are a little bigger… watch this space as I’m only just getting started😀 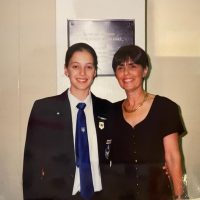 Nirit and her mom, a teacher at Herzlia Constantia 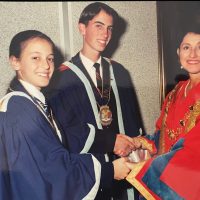 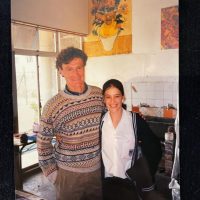 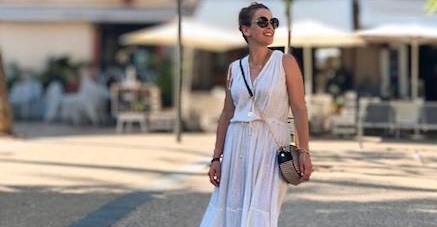